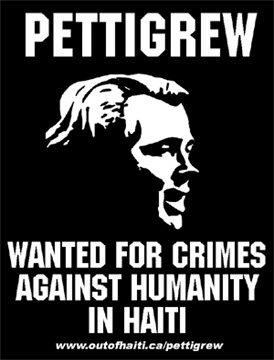 Pierre Pettigrew became Canadian foreign affairs minister in July 2004. Since that time he has been responsible for Canada's disastrous policy in Haiti, which includes financing, assisting and overseeing a brutal police force (for further information see outofhaiti.ca). Over the past eighteen months, Pettigrew has made two trips to meet with the unelected regime put in place after the Canadian backed coup d'etat of February 29th, 2004.

On a number of occasions Pettigrew has stated his uncritical support for the installed regime. Pettigrew's support is in stark contrast to numerous human rights investigations that have condemned the unelected government. When questioned on human rights violations reported by mainstream sources such as Associated Press, Reuters and the University of Miami, Pettigrew has dismissed the reports as "propaganda which is absolutely not interesting."

Before becoming Foreign Affairs Minister, Pettigrew already had troubling connections to the subversion of Haitian democracy. On February 5, 2004, Pettigrew met with the self-styled "intellectual author" of the violent uprising that ousted Haiti's elected government. On March 9, 2021 the MontrŽal Gazette's Sue Montgomery revealed that, "He [Arcelin] took advantage of the visit and the political clout of his sister-in-law [former Conservative MP, Nicole-Arcelin-Roy] to meet with [then-] Health Minister Pierre Pettigrew 'I explained the reality of Haiti to him,' Arcelin said, pulling Pettigrew's business card out of his wallet. 'He promised to make a report to the Canadian government about what I had said.'"

The same day Pettigrew met with the "intellectual author" of the rebellion, Arcelin's paramilitary colleagues, who have well-known CIA connections, invaded Haiti from the Dominican Republic. Three weeks later, the elected President, Jean Bertrand Aristide, and thousands of other elected officials were forced out of office. Aristide was driven from the country and his government replaced by a client regime.

Ten days after the coup, Arcelin admitted to the Montreal Gazette that he and Guy Philippe (a known killer and drug runner) had been plotting to overthrow Aristide for at least two years. Arcelin told the Gazette that, "Two years ago, I met [rebel leader] Guy Philippe in Santo domingo and we spent 10 to 15 hours a day together, plotting against Aristide." He continued the interview, stating, "From time to time we'd [Arcelin and Philippe] cross the border clandestinely through the woods to conspire against Aristide, to meet with the opposition and regional leaders to prepare for Aristide's downfall."

In fact, Arcelin and Philippe were arrested by Dominican authorities for conspiring against the Haitian government in 2003. Arcelin and Philippe's arrests were widely reported at the time. A May 7th 2003 Associated Press article quoted a Dominican military official saying: "These people are being investigated because of allegations that they are trying to reach Haiti with the aim of conspiring" against the democratically elected government.

So on February 5th - the same day the armed uprising began in Haiti - Pettigrew met with a key player in the uprising, who had already been arrested for conspiring against Haiti's elected government. Pettigrew should have been aware of Arcelin's background; his ties to known killers and drug dealers.

If Pettigrew met Arcelin aware of his history, shouldn't Pettigrew explain why? If Pettigrew's office didn't investigate (a quick google search, maybe?) Arcelin's dubious ties before scheduling a meeting with him, isn't that a sign of incompetence? Is it a coincidence that the meeting took place the same day Arcelin's colleagues launched a violent campaign -- dozens were killed in subsequent days -- to overthrow a fledgling democracy? Did the report Minister Pettigrew make to the Liberal cabinet based on his meeting with Arcelin affect Canada's subsequent support for overthrowing Haiti's elected government?

The Canada Haiti Action Network believes that Pierre Pettigrew's unequivocal support to an unelected and brutal regime in Haiti, combined with his ties to those who led an armed uprising against Haiti's constitutional government, is reason enough for residents of Papineau to send Pettigrew packing on January 23rd.