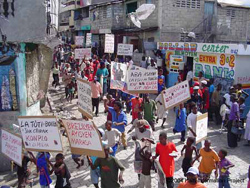 Residents of the impoverished Port-au-Prince neighbourhood of Bel Air risk death by police guns (backed by the UN) to demonstrate in favour of the return of their elected government.

Canada, according to Haiti-based independent journalist Kevin Pina, is "deeply involved" in planning for elections in Haiti, and is implementing "draconian rules" to make it mandatory to vote, denying non-voters access to social security or government services. "It's similar to what happened in 1982 in El Salvador--people were so afraid--if they didn't have the electoral stamp on their ID card, they could be pulled aside by the police and killed, which did happen in El Salvador."

"Paul Martin, George Bush, Condoleeza Rice--they believe that they can maintain this illusion that there is a process of normalization going on in Haiti, but Haiti is not Iraq. They may come up with this proposal to allow Haitians abroad to vote in the next elections, so that they can have pictures of them with the ink on their thumbs and say jeez, what success this election was."

"What are they going to do when more than 50,000 Haitians hit the streets to protest against the elections and the RCMP-trained police force has to open fire on them."

"They were tutored by the international community about 'one person, one vote'. They feel like they played by the rules of the game, only to have it stolen from them again."

Pina says that it is impossible to have legitimate elections while the majority political party is being forced to hide in the woods, in fear for their lives. "Lavalas has made it clear that the conditions do not exist for them to participate, and I can't blame them."

On February 7, 2004--three weeks before the coup--hundreds of thousands of Haitians turned out to demonstrate against attempts to overthrow their elected government. Press reports at the time focused on a much smaller (the largest estimates were around 1,000) opposition protest.

In a August 2005 statement, Lavalas officials declared that before elections are held, the following conditions must be met:

1. The iron fist Coup d'état government stops killing the people
2. All political prisoners are released
3. All elected officials of the 2000 elections are reinstated in order to finish their term in office, as required by the Constitution
4. Everyone forced into exile returns home

"I've often felt that maybe the page should be turned, there's tremendous pressure to turn the page on Aristide, in order for Haiti to move forward. But the truth is, how can you say that there are conditions for elections when you have political prisoners?"

"Rightly or wrongly," the majority of Haitians are calling for the return of their elected president, says Pina.

Pina continues: "The role of Canada and the other countries in Haiti is to try to silence those voices, to prepare for the next election so that they can present to the world the facade that the page has been turned."

Pina asserts that the coming elections will provide the illusion of choice, but will ultimately create disunity. "There are going to be 140 parties in the next election--140 parties!--more than 100 candidates for president... To me, that's plurality run amok."

"On the surface, it seems like Haitians have more choices, but in reality they have fewer choices. Who do you vote for for president when there are 100 candidates for president and each of them is from a tiny party, each of which wants to hold power in order to serve its own personal financial and political interests. That's not democracy, it's just a facade to cover the coup d'etat of February 29."

Pina, however, is not optimistic that the Canadian government will change course. "It gets to a level where they can no longer deny it, so they have to spin it. All that's left is to break off a couple of [Lavalas] opportunists who will take part in the elections."

Next: Even "aid" is undermining democracy in Haiti »